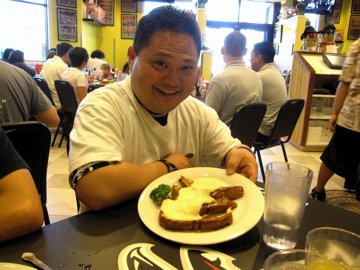 Daniel Akemoto has played on the `ukulele since elementary school. At that time, the kumu had told the students, that the `ukulele is an instrument of the people, and should be used to make others happy. It shouldn’t be used in an arrogant manner. Through the years of studying music, and facing many struggles, these words eventually became his way of thinking, not just for `ukulele, but for all instruments. Once he let go of trying to be better than others, he began to see improvement in his own musicianship and found doors began to open, including being a part of the `Ukulele Hale `ohana in 2007, when the studio opened.

Daniel has been instructed at Roy Sakuma’s `Ukulele Studio for 10 years, Daniel has studied tuba and low brass technique with Daniel Asao, Anthony Kniffen, and Jim Decker; trumpet and high brass technique in Japan from various teachers. He also studied voice under Masae Ishizu, Hawaiian (or lap-steel) guitar with Masami “Matt” Kobayashi, and various forms of dance from various studios and instructors.

Daniel is a graduate of University of Hawai`i with a BA in Music and a PBCSE degree in Secondary education. He has also studied music with the Tenri Music Institute in Japan. He has been a substitute music teacher at Iolani School, taught band and orchestra at Saint Louis School, Kuhio Elementary, and Kaimuki Middle School. Currently, he is a full time music teacher at Kalani High School, teaching Orchestra, Polynesian Music, and Creative Dance; the latter two of which he had personally established. He also rejuvenated the chorus program at Kalani, which is now taught by another teacher, due to the size of the music program at Kalani.

For fun, Daniel likes to sing and play the `ukulele, with his small Hawaiian band, Kui Lima. They have performed for various weddings, birthday celebrations, and charity. He also draws and paints, and has formed a Community Concert Band, which performs at various retirement homes and community events.